Dinosaur knows your time is up.

Monday was the last day of Works In Progress at the Richard Hugo House. Monday was the last day of official excuses for two slices and 1-3 cans of discount Hamms at Big Mario's in a contained time frame before heading over to the RHH. It was time to let Robert P Kaye make like Jesus, and take the wheel. Kris and Bryan and Arlo and a bunch of folks who'd not been in a while mobbed down and I had the trusty Dinosaur Protector to watch hungrily as the night went on. Afterward we all (including Rachel's younger bro and his gf) went to the Cha Cha, Kris got enthused about Lords of the New Church and I got enthused about Mudhoney, respectively, as they drowned out conversation. 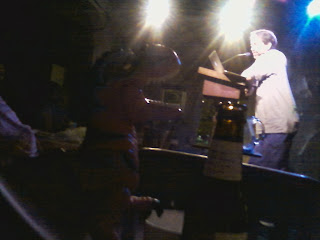 Previously, Sunday night, I hopped a bus to Capitol Hill (ALWAYS WITH THE CAPITOL HILL) and shared a laptop (and some Roses Bourbon) with Chelsea K, who hosts The Casserole, an online reading series (which I explained just one post ago.) I read to the forced silence of Ethan and Rachel E, while Emily Wittenhagen beamed in from Roslyn. I read some new poems, some reworked old poems and a handful of less-frequently read poems from FJGTPL. After she reads, we talk about Aliens, and Owls, and some vague things about forms of writing. Watch it below.

Tonight I am going to work, in about an hour and a half, after a day of largely editing/advising on other people's poetry. This is work I usually get paid for, but sometimes doing it completely for free feels more liberating. . .? That was a dumb sentence I just typed, but I'm leaving it there, because I meant it.

I'll leave you with the following: a list of bars poets can, or should, drink at, in case you'd not seen that before, and this post from Leigh Bell, who writes on artistic self-care in way that neither makes me want to puke, nor makes me suspect she's selling something. She's able to overcome the initial eye-roll I have at "The Artist's Way," to address issues that tend to be either pushed aside or can be overcome if you come to this new writer's retreat and conference and send away for a series of tapes. . . .
It's a relatively quick read for a fairly in-depth thought process, which is something she's pretty good at, as you'll see if you take on her prior posts.
Posted by graham at 17:31 1 comment:

"I now understand panic attacks as a bitter struggle between myself and the homunculus."--B.E.

Tonight I'm reading with Emily Wittenhagen on the Google Hangout reading series The Casserole, hosted by Chelsea Kurnick, whose been running this reading from her Cap Hill apartment for several months (a year?) with an impressive consistency and range of readers.
Pretty stoked to be reading. You can find it on Google Hangouts, or http://www.youtube.com/users/thecasserolereading, if you can't see it live, it'll be up there. I'm currently eating Cheezits, printing out poems and listening to Bryan Edenfield talk about fighting his homunculus. Here's a few good ones from recent months:

They're building a crater
in the lot behind the bank
concrete gives way to clay,

unexpected tidepools.
someday, hundreds of people
will stack on this pit,